Intelligence and pigmentation in Hirsch's sample

Additional results from Nathaniel Hirsch's 1926 study of children of immigrants -- this table further subdividing the sample by degree of hair and eye pigmentation. 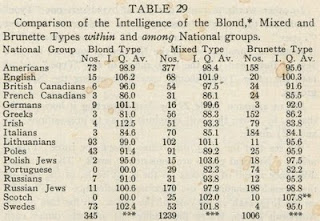 In this section of the study, Hirsch is opposing some straw man version of Nordicism:


The Racialists maintain not only that the Nordics are long-headed, tall people with blue eyes and light hair, but more importantly it is claimed that they are mentally superior to all non-Nordic races.

And the results satisfy him:


that intellectual differences although (1) significant, (2) innate and (3) relatively permanent are Natio-Racial in character rather than Racial.

Which definitely shows "the Racialists". I did find the differences between pigmentation morphotypes within some national groups interesting (though I don't put undue weight on these results), considering light hair and light eyes have apparently been reported elsewhere as correlates of IQ. You can read the entire monograph (which includes more information on the tests used and answers to some criticisms) online at Harvard's open collection on immigration.

I would note that some of the IQ differences that do exist might be due to regional variations within the larger nations.

I wasn't aware of the north vs south russian difference. Though I suppose many Russians are the descendats of Tatars who have been Russified.

Off-topic, but I found it amusing to see a leftist say that given certain facts you ought to be anti-semitic and it would be irrational not to be:
http://crookedtimber.org/2010/08/07/badpla/
I wonder if he thinks it's proper to be anti-Roma.

I don't think either type of Russian is significantly "mongrel". Nevertheless they are different.

"considering light hair and light eyes have apparently been reported elsewhere as correlates of IQ. "

Tell us about the aborigines and melanesians with blonde hair and the south asians with blue eyes.

Pretty bizarre association and not relevant to this post. I'm not very interested in Australoids myself, but since you asked, I don't disagree with Rajiv:

Addendum: Some work on the pigmentation genetics of Melanesian populations has been done. They resemble Africans more than any other non-African group in their genetic architecture of loci implicated in the variation of pigmentation. That would basically eliminate the European admixture model to my mind to explain light hair, and increase the probability of bleaching and/or a different and unknown locus.

Note: Blondism among North African, Middle Eastern, Central and South Asian populations is I believe either simply part of the natural continuum of West Eurasians, or, admixture from Europeans or other blonder groups. I believe that this is even the source of blondism among groups like the Hmong, who have a legend of migration from deeper in Asia, where they may have mixed with West Eurasian populations on the fringes of China proper.

You're alluding to light eyes and hair being correlated with IQ. I wonder how that works when you've got so many australoids with light hair, in addition to many south asians and middle easterners having light eyes?

The Razib link has no relevance to this. By the way, Jensen listed light hair and eyes in relation to one or two studies finding a correlation between IQ and some peculiar physical traits.

Think harder. If you want to "debate" me, start by not being a fucking retard.

Why do you put weight on Jensen casually mentioning "one or two" studies that find a positive association with light hair and eyes and IQ, but don't with this ancient data that finds it to be uncorrelated with IQ, among many other things? (but devote a post to it's general IQ findings on different european ethnic groups? That should be asked with your emphasis on all of the ancient data you post as a whole.)

(1) I don't put undue weight on anything. I included that extraneous disclaimer in direct response to your show of hurt feelings in the previous thread.

(2) Pigmentation is not "uncorrelated with IQ" in this sample (either overall or within many of the national groups).

(3) The correlations either exist or don't exist, within or among a given population or set of populations. Australoids have no bearing on the question as it relates to Europeans.

(4) The criterion for whether or not I post something is that I find it interesting. Period. Not whether or not it makes you feel bad about yourself. I don't know you and I don't care about your mental state. If you find I occasionally post information that inflames some inferiority complex of yours, you are welcome to stop reading.

Nice Post Thanks for sharing.
Pigmentation
Pigmentation refers to the discoloration of skin. Which occurs due to the presence of melanin, the pigmenting agent responsible for the dark black-brown tones existing in concentrated areas within the skin.

There are so much important for get an idea about beauty.This is a nice website thats you know about beauty. I am enjoyed reading your description