This study ("Eye color predicts but does not directly influence perceived dominance in men") has gotten some attention, having been reported as if the result were universally applicable.

In fact, there's no evidence it applies outside the sampled population (students in Prague). What the researchers actually seem to have "discovered" is the existence of population structure in the Czech Republic that manifests in different frequencies of morphological types among lightly- and heavily-pigmented inhabitants. 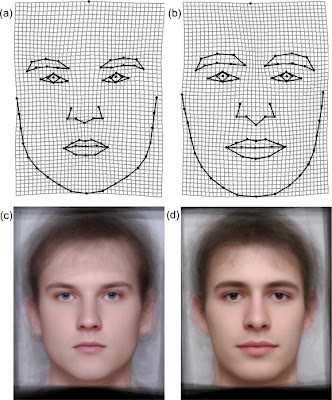 The composite photographs from the paper show a somewhat foetalized, Slavic-looking "Alpine" blue-eyed morph and a "Dinaric" brown-eyed morph. Or as the authors put it:


In contrast with blue-eyed males, brown-eyed males have statistically broader and rather massive chins, broader (laterally prolonged) mouths, larger noses, and eyes that are closer together with larger eyebrows. In contrast, blue-eyed males show smaller and sharper chins, mouths that are laterally narrower, noses smaller, and a greater span between the eyes.

According to Coon, "Alpine" and "Dinaric" types differ in frequency between regions of what of what is now the Czech Republic:


While Alpines and Norics are commonest in Bohemia, there is a strong concentration of Dinarics in Moravia, especially among the miners, who seem to form a special group with both racial and occupational peculiarities.

To their credit, the authors advance "genetic linkage" as one potential explanation for their results (noting that this hypothesis could be tested by repeating the experiment in different populations), though this seems to be their least favorite of the three possible explanations they lay out. Unfortunately for them, it's also the most likely to be correct.
Posted by n/a at 6/21/2010 12:05:00 AM

I think your concern here sounds conceptually reasonable, but I admit to lacking the factual knowledge to say whether it applies. I.e. I do not know enough about population structure and genetic differences in Czechoslovakia to say whether this is a real problem here. Given your premise is correct however, I might side with with your conclusion also...
If you write another post elaborating on this, please let me know. I'm interested in learning more about this.
Thanks.

Dominant meaning darker and uglier? Sure, I'll buy that.

Northern European Upper Paleolithics trump other Caucasoid males in that regard. Two of those are the main event at UFC 116.

Benedict Jones, a psychologist at the University of Aberdeen in Scotland, who was not involved in the study, described the finding as "surprising" and "not one I would necessarily [have] expected." He suggested that other researchers would need to also run their own tests to verify that the reported link was not "an idiosyncrasy of this particular sample of face images."

Obviously, as drawing a huge generalization from a small sample of local subracial correlations with pigmentation is silly. You could take some small brown-eyed Asians and compare them to blond UP hulks and say look how dominant blue-eyed men are.

I accept that lighter pigmentation by itself is more neotenic, associated with progressive evolution, or perceived less "dominant," i.e. dark pigmentation is uglier and scarier.

"I accept that lighter pigmentation by itself is more neotenic, associated with progressive evolution, or perceived less "dominant," i.e. dark pigmentation is uglier and scarier."

Are albinos and those with epicanthic folds biologically more advanced?

Neoteny is how we evolved into large-brained humans.

Albinism is a genetic disorder. That's like comparing dwarfism or macrocephaly to the value of a large brain.

It shouldn't come as a surprise that the most pigmented and least neotenic human races are the least evolved and least intelligent.

Yup, brown eyes are so dominant that about 90-95% of the world's people have them and unless pro-White policies are implemented in the next few decades blue eyes will go extinct for all time.

Their favoured hypothesis sounds rather Boasian:

The social feedback hypothesis is based on the presumption that blue and brown-eyed subjects are treated differently within their social surroundings, e.g. by their parents and peers. Young children usually have blue eyes, while definitive iris color develops during the first years of life (Bito, Matheny, Cruickshanks, Nondahl, & Carino, 1997). It is possible that subjects with blue eyes are treated as a small child for a longer period than brown-eyed children. Such early social experience may have been literally ‘‘inscribed” into their faces, preserved until adulthood, and finally bring on the perception of higher submissiveness.

Their use of the term "genetic linkage hypothesis" is confusing, and perhaps a sort of hereditarian straw man. By this hypothesis do they mean that all genes involved in these phenotypes are strongly linked along the same chromosomal region? That's what I think of when I hear "genetic linkage". Perhaps "population structure hypothesis", or "gene correlation hypothesis" would have been better terms.

Based on their last names, it appears that perhaps the first and senior authors have some German background while the other 2 do not.

I may have introduced the confusion by being overgenerous in my interpretation of what the authors intended by "genetic linkage". You may be right that they had in mind only physical linkage and failed to consider the possibility of population structure.

Are some people smoking crack on this blog ? Personally i don't think pigmentation has anything to do with intelligence , that's not what the article is saying. its just saying people with brown eyes look more dominant. Whats the big deal? some nordasist are paranoid if you ask me . I'm a 6"2 keltic-nordish with light brown hair and brown eyes . My brothers have Blond hair & blue eyes. i'm smarter and physically stronger than both of them put together :) I think this article is right in most cases,because my jaw is like a brick lol

Are some people smoking crack on this blog ? Personally i don't think pigmentation has anything to do with intelligence , that's not what the article is saying. its just saying people with brown eyes look more dominant.

"Dominance" could just as well be called ugliness. Dark people and ugly people are scarier, they cause a disturbance in the mind. This could be perceived as "dominance," but not really, more like avoidance.

Funny. I find myself much more attracted to the dinaric version of this man than the alpine.

In my country black or brown eyes are extremally rare. And nobody looks dominant with dark colours but baby face.