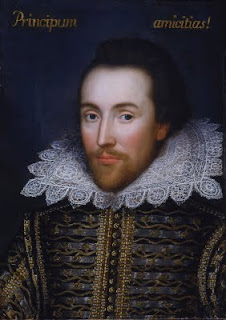 The Washington Post has a long article on the Cobbe portrait:


Just two images of Shakespeare are considered authentic by scholars, and both were done after the playwright died. [. . .] Both depictions are so unintelligent-looking that scholars blame them for instigating the Author Controversy, which is not really a controversy so much as a campaign by conspiracy-minded amateurs to prove that someone more visually appealing wrote the plays. The thinking goes that the "peculiar dough-faced man" in the Droeshout, as Stephen Greenblatt of Harvard University calls him, is too stolid to have written such soaring words. Someone else must have, preferably someone good-looking. As scholar Marjorie Garber writes, "We'd rather he not look like an egghead."

The Author Controversy persists despite considerable documentary evidence. We have the man from Stratford's pay stubs for performing at court, his certificate of occupancy for the Globe Theatre, and his will, in which he left memorial rings to some London actors. Funny he would do that if he was just a country burgher who didn't write the plays.

Still, it would help to have a decent picture of the man in his prime to keep the conspiracy theorists at bay. [. . .]

Ending No. 1: It's him. Someone discovers proof. [. . .] In which case our view of Shakespeare must shift. He is no bourgeois pudge but rather neck-deep in romantic and political intrigue, until he is forced back to the humdrum of Stratford only grudgingly, by some disgrace. [. . .]

"Sometimes people say, 'Well, does it matter what people looked like?'" Wells says. "Well, of course it matters. It's why we have portrait galleries. It's why we want to know what Shelley and Keats looked like -- and sometimes they look as we would like them to look."

I don't get what they are talking about. He looks fine to me. Certainly well above today's median. The costume sure is feminine though.

The bolded text is referring to previously known depictions.

Just to touch on one quibble: the idea isn't that Shakespeare himself was a phantom, but rather that this jobbing player was used as a front for the presumably aristocratic real author.