"It's impossible to estimate BMI simply from skeletal remains."

Wrong. You can dispute the accuracy of these estimates, but if you are unaware such estimates even exist you probably are not in a good position to do so. Body mass (and stature) can be estimated from skeletal remains with reasonable confidence:


using both “mechanical” methods which rely on the support of body mass by weight-bearing skeletal elements, and “morphometric” methods which reconstruct body mass through direct assessment of body size and shape. A previous comparison of two such techniques, using femoral head breadth (mechanical) and stature and bi-iliac breadth (morphometric), indicated a good general correspondence between them (Ruff et al. [1997] Nature 387:173–176). [. . .] This study incorporates skeletal measures taken from 1,173 Holocene adult individuals, representing diverse geographic origins, body sizes, and body shapes. [. . .] Body masses were calculated using three available femoral head breadth (FH) formulae and the stature/bi-iliac breadth (STBIB) formula, and compared. All methods yielded similar results. [. . .] Since the STBIB method was validated on other samples, and the FH methods produced similar estimates, this argues that either may be applied to skeletal remains with some confidence.

These estimates translate into mean BMIs of 23.2 and 23.3 for Early and Late Upper Paleolithic European female samples, lending little support to the notion that morbid obesity of the sort the better-known "Venus" figurines are commonly assumed to depict was common. Speaking of which:


Found throughout Upper Paleolithic Europe, the so-called “Venus figurines”, of which the Willendorf Venus is a famous example, are frequently represented as corpulent or pregnant female figures, though they exist in many shapes and sizes and in small numbers, male. While it may be reasonable, as some scholars have, to interpret the images as an early depiction of obesity, myriad interpretations abound as to the meaning and function of the figurines. Crafted from a variety of materials including stone, ivory, bone and clay, the figurines have been variously considered to be fertility idols, self-representations of pregnancy, mother goddesses or charms among other interpretations [2] L. Mc Dermott, Self-representation in Upper Paleolithic female figurines, Curr Anthropol 37 (1996), pp. 227–276. Full Text via CrossRef[2], [3] and [4].

Obesity is not usually thought to be a hallmark of Upper Paleolithic civilization. Cultural assemblages from this time period are usually regarded by archaeologists as the residue of mobile hunter–gatherer populations. While the figurines are frequently depicted as rotund, obesity is not consonant with a mobile hunter–gatherer lifestyle, where groups would have moved to access seasonally available resources.


The generalizations in the textbooks do some violence to the facts. Few of me statuettes represent gross obesity, and some are quite slender (Fig. 1). Even the, first figurines found in the 1890s were classified by Piette into svelte and obese classes (Delporte 1979:73). Half a century ago Passemard (1938) examined all the then-known figurines to see whether they were steatopygous, a description quite popular at that time, and came to the conclusion that most were not. Saccasyn Della Santa (1947:9-13) reviewed the literature on the figurines again, and also concluded that they were not meant to represent steatopygia.

An unpublished statistical study of the variation in body shapes made 22 measurements on each figurine for which both frontal and profile photographs could be found-24 measurable figurines in all. The statuettes sorted into distinct groups of 10 obese (wide hips and thick body), 3 steatopygous (protruding buttocks), and 11 normal (Nelson n.d.).

Compare: two of the more famous "Venus" figurines vs. a Hottentot woman. 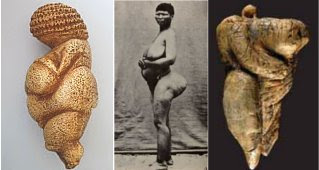 You are right they weren't 'fat', 'few of the statuettes represent gross obesity'. The propensity to put on some extra adipose tissue may have increased in Early and Late Upper Paleolithic European females as an adaptation to cold weather and long winters.

The amount of fat they carried would vary over a year. The long winter would restrict the season for gathering (berries ect) while colder weather increases energy expenditure, So winter would be a long seasonal period of scarcity when fat stores were burnt off.

Summer would be a happy time, with abundant food and relatively chubby people. I think the figurines would usually show women in summer. The artist probably tended to exaggerate the amount of fat, Artists do tend to accentuate positive characteristics.

The proportion of their limbs inclined to the African. With few exceptions the engravings and figurines adhere to a style depicting feminine silhouettes with over represented buttocks.

Frankly, I'm not convinced (nor am I convinced by appeals to authority). First, the skeletal frame has to support not only fatty tissues but also muscle (which is denser and heavier than fat). Any estimate of adiposity would therefore be dependent on assumptions about muscle thickness (which also varies significantly). Second, and more importantly, it is doubtful that variations in bone width would be able to capture variations in fatty tissue thickness, all the more so because we're dealing with small samples of skeletal remains whose age and sex are often conjectural.

"2) natural selection will compensate by increasing the width and density of certain bones, like the femur;"

No, that's not the argument. Mechanical stress induces bone remodeling during the individual's life.

"Any estimate of adiposity would therefore be dependent on assumptions about muscle thickness (which also varies significantly)."

This argument would make more sense if you were talking about men and trying to account for high BMIs. A BMI of 23 means not morbidly obese in any human population living or imaginable.