Hydraulic cement: Thank the English, not the Romans 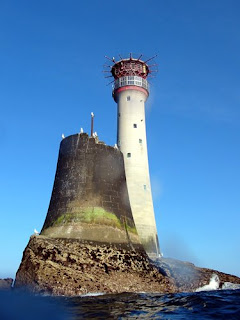 Portland cement as widely used today was originally formulated by Englishman William Aspdin, building on the work of other Englishmen, including his father Joseph Aspdin and, ultimately, John Smeaton:

Smeaton investigated the cementing properties of various mortars, made from lime obtained from various locations, and discovered that the best mortars were made from the calcination of limes that contained considerable proportions of clay minerals (argillaceous lime). This was the first occasion that the importance of clay mixed with the lime had been recognized in the formation of a hydraulic setting cement. It was found that limes that did not dissolve completely in nitric acid (clay being insoluble in the acid) possessed good hydraulic properties (Kohlhaas, 1983). The cementitious agent Smeaton finally used was made from such a clay containing lime which was mixed with an equal quantity of pozzolana (Lea, 1970). The lighthouse that he constructed stood for 123 years until 1879 and only failed when its foundations were undermined by the sea. Smeaton's conclusions about the importance of the presence of clay were not published until after his death in 1792. Smeaton was the first to call himself a civil engineer (as distinct from a military engineer). In the preface to his book, Hydraulischen Moertel, W Michaelis stated in 1869 (in translation):

A century has elapsed since the famous Smeaton completed the building of the Eddystone Lighthouse. Not only the seafaring but for all humanity stands as a true signal of blessed work, a light in the dark night. From the scientific point of view it illuminated the darkness of nearly 2000 years.

The errors which came to us from the Romans and which were shared even by the excellent Belidor, were dispersed.

The Eddystone Lighthouse is the foundation upon which our knowledge of hydraulic mortars has been built and is the chief pillar of modern construction. Smeaton freed us from the shackles of tradition by showing us that the purest and hardest limestone is not the best, at least for hydraulic purposes, and that the source of the hydraulicity of lime mortar must be sought in the argillacrious admixtures (Draffin, 1976).

The cement was called 'Roman cement' although it in no way resembled the true Roman cement, except for its hydraulic setting reactions.

The Romans ceased building with high-quality concrete by around A.D. 300. Our modern knowledge of cement owes nothing to them.

Cement was used from the decline of the Empire and through the Middle Ages, but none of it was any good until comparatively recent times (Davey, 1961). [. . .]

In this case, it was not that a Roman secret was lost, rather that the Romans, who did no testing, never learned what they had. The very idea of testing is comparatively recent, and the engineer John Smeaton, who tested samples for the construction of the Eddystone Light in the years 1756– 1759 (Davey, 1961) is, I suspect, the first man on the planet deliberately to test cements of differing compositions.

Email ThisBlogThis!Share to TwitterShare to FacebookShare to Pinterest
Labels: Medicism

Tesla does not top Murray's list in physics or any other science. Still it's interesting to contemplate what moves people to loyalty to a white race concept that didn't exist prior to Boas and Hirschfeld.

Boas asserts the eastern, southern and Hebrew Europeans transform into Nords upon their birth in the US and vary significantly from the European parents.

Hirshfeld, according to Sam Francis, targeted Nordic theorists like Gobineau, who believed he was descended from Vikings and Condotteri, and Chamberlain.

"Most of Hirschfeld’s polemic is aimed at the proponents of intra-European racial differences (Nordics, Alpines, Mediterraneans, Dinarics, etc.) and not at differences between whites and other major races (though he steadfastly denies such differences as well)."

Check that, it's Condottieri.

"More recent is the problem of the immigration of people representing all the nationalities of Europe, western Asia and northern Africa. Until late in the second half of the nineteenth century the immigrants consisted almost entirely of people of northwestern Europe, natives of Great Britain, Scandinavia, Germany, Switzerland, Holland, Belgium and France, but subsequently the composition of the masses changed completely. With the economic development of Germany, German immigration dwindled; while at the same time Italians, the various Slavic peoples of Austria, Russia and the Balkan Peninsula, Hungarians, Roumanians, east European Hebrews, not to mention the numerous other nationalities, arrived in ever-increasing numbers. There is no doubt that these people of eastern and southern Europe represent a physical type distinct from the physical type of northwestern Europe; and it is clear, even to the most casual observer, that their present social standards differ fundamentally from our own. Since the number of new arrivals could be counted in normal years by hundreds of thousands, the question may well be asked, What will be the result of this influx of types distinct from our own, if it is to continue for a considerable length of time?"

"Tesla does not top Murray's list in physics or any other science."

Yes. Tesla's "index score" in Murray's list of significant figures in Technology is 18 (out of the possible 100 obtained by Watt and Edison), which doesn't even put him in the top 40. He doesn't show up at all in the Physics inventory.

"Still it's interesting to contemplate what moves people to loyalty to a white race concept that didn't exist prior to Boas and Hirschfeld."

"Kubilai's" behavior strikes me as being much more likely the product of inferiority complexes than "loyalty to the white race".

I have nothing to apologize for. My comment was "If . . .", and I did not think it was likely, but allowed for the possibility Fade knew something I didn't.

Tesla was a troubled genius. All people with great gifts are still human and as such, have short-comings.