Visher on racial stock and achievement

Note: "Starred" scientists are those in American Men of Science voted by their peers as being the most highly distinguished, or having the greatest merit. So as late as 1946, almost a third of the top American scientists traced a substantial fraction of their ancestry back to 17th-century New England. In 1904, the number stood at more than half.

[p. 520:]
some backgrounds and judgments, from questionnaire returns

This chapter presents an analysis of 905 returns received of a questionnaire sent November, 1946 to the living starred scientists seeking chiefly information as to their "backgrounds" and conclusions ("judgments") as to the significance of various influences.

[p. 540:]
In America where nearly all of the world's racial stocks are represented, there is a considerable interest in their comparative contribution. Cattell in his 1904 questionnaire to the scientists starred in 1903 (and to some additional persons who were almost starred, included to increase the number of returns to about 1000) found that "more than half of the scientists were at least of half Puritan stock." Since 1904, the Puritan stock in America has formed a declining percentage of the total population, partly because it was the first major American group to practice rigorous birth control. Also the millions of immigrants who have arrived in America since 1800 have contributed an increasing share of our population. These changes increase the desirability of obtaining information on the subject by the 1946 questionnaire. A total of 873 of the 905 scientists who replied reported on their "racial stock or blood." Tables 10-20 and 10-21 show the percentages which had various fractions of the chief "bloods." The Puritan stock led in each of the categories, full or nearly full bloods, 3/4 or more, half or more, quarter or more. However instead of the "more than half" found by Cattell, their contribution has declined to 31 percent which are half or more Puritan. Other English stock is second, German third and Scots and Scotch-Irish 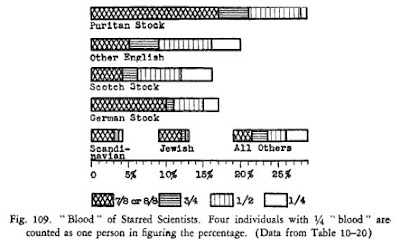 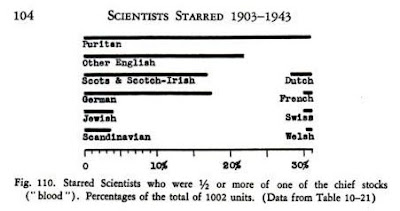 [p. 426:]
Selection of another type is illustrated by immigrants of exceptional ability. These have come from numerous areas; for example, a very considerable number of eminent Americans are of German descent, especially of the liberals who came over following the revolution of 1848. Scotland, both directly and via north Ireland (the Scotch Irish), also has supplied many ancestors of eminent Americans. But according to much evidence, by far the largest group of American leaders are descendants of emigrants from East Anglia, England, the district which, according to Havelock Ellis ("British Genius"), yielded relatively many eminent British and most of the Puritans of New England, the Quakers and the Cavaliers of Virginia. (Cattell found that most of the scientific leaders of 1903 were at least half Puritan in descent). The westward spread of the descendants of the Puritans out from New England clearly helps explain the geographical contrasts in the yield of notables. Conversely, their partial submergence numerically by less valuable stocks largely produce the decline in the yield of notables in proportion to population in New England and various more western areas.

Finally, areas yield most notables which contain most mentally alert, ambitious, persistent, energetic people possessed of high ideals. Such people seek opportunities to use their abilities; they appreciate congenial associates and therefore congregate in desirable towns and in choice residential districts of suburbs of cities. Since Quakers, Scotch, Germans of 1848 and especially Yankees include many people of this type, many notables were born wherever such stocks formed a relatively large share of the population. (End of 1937 article.)

Very interesting information.
We never hear about the achivements of the Puritan stock descendants, except to hear how they are part of the bad 'elites' who are selling our country out. It's nice to see some evidence of positive accomplishments from our ancestors.